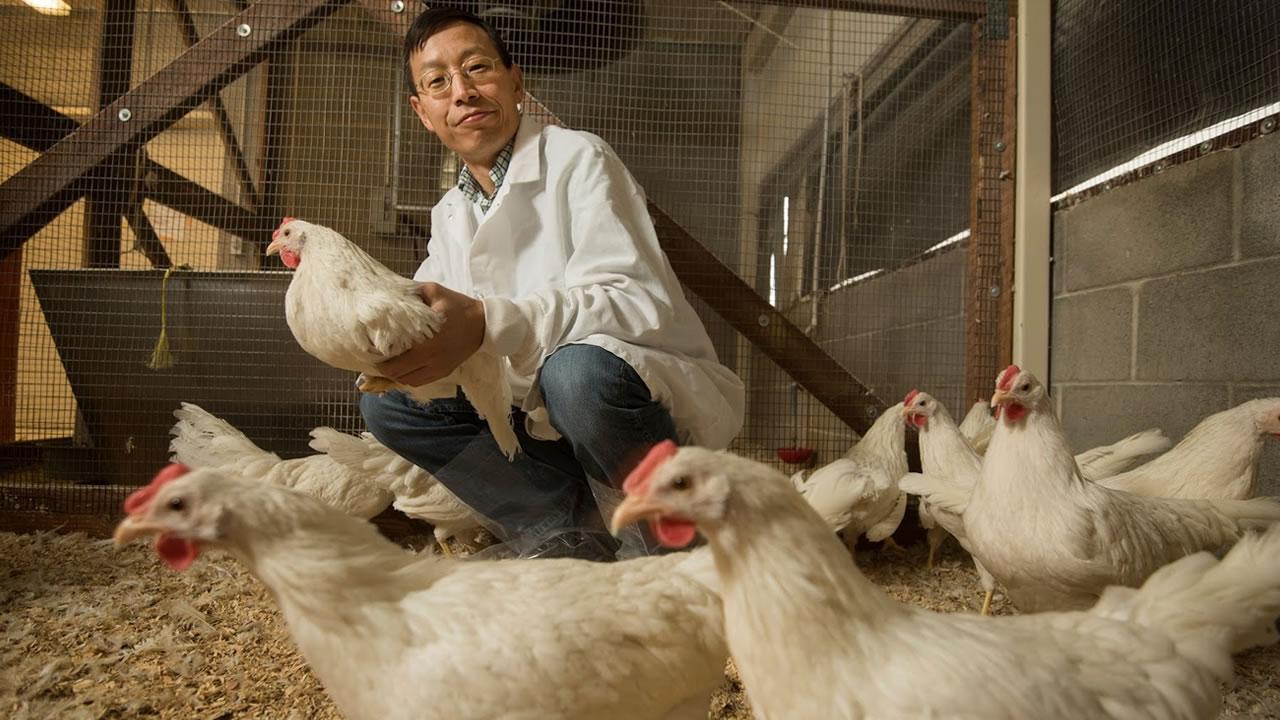 In rural African villages, chickens provide families with much more than meat and eggs.

Traditionally, it is women who tend small backyard flocks.  Chickens provide high-protein sustenance for families, as well as income that empowers women and improves their quality of life.  Raising indigenous chickens is a relatively minor investment compared to cattle, pigs, or other livestock, since the birds scavenge for food and live outdoors without housing.

But rural poultry production in Africa is threatened by the number one avian virus on the continent—Newcastle disease.  Newcastle is a highly contagious respiratory illness that can decimate entire flocks in a matter of days. In the United States and other developed countries, the disease is controlled through vaccination.  In African countries, various obstacles prevent the Newcastle vaccine from being a feasible means to poultry production.

UC Davis geneticist and animal science professor Huaijun Zhou hopes that new discoveries in chicken genome research will help breed a more robust chicken that offers greater food security to poor African households.  Led by Zhou, an international group of multidisciplinary researchers is working on  advanced genetic and genomic approaches to develop new strains of chicken with enhanced  protection from both Newcastle disease and the heat stress that chickens face in harsh African climates.  Scientists are more than three years into the five-year Feed the Future Innovation Lab for Genomics to Improve Poultry project, which has $6 million in USAID funding.

“There is a genetic component to disease and heat resistance,” said Zhou, who is a UC Davis Chancellor’s Fellow.  “We aren’t saying the genetic or genomic approach will replace vaccinations—we’re taking a complimentary approach.  We want to identify the genetic markers that are associated with resistance and use the natural variation to breed birds that are more resilient.”

Another component of the poultry project is to build capacity—renovating facilities and training scientists at Sokoine University of Agriculture in Tanzania and at the University of Ghana so that the work in these countries can continue beyond the initial involvement of American universities.

One of the most difficult aspects of the project is that disease and heat resistance are complex traits, which means they are controlled by many genes—perhaps hundreds.  “Each gene involved tends to contribute a small genetic effect, making them hard to detect,” said Zhou.  “It’s a tremendous challenge.”

Makagon, Blatchford and Horback study impacts of the rearing environment on keel bone integrity and spatial awareness of laying hens